During the spectacular Occupy Wall Street movement, there was never any talk of it being manipulated by “foreign forces.” When the even more powerful Sunflower Movement in Taiwan took place—during which radical students not only occupied the Legislative Yuan, but also barged into the Executive Yuan—there was also no talk of manipulation by “foreign forces.” Only in mainland China, however, “foreign forces” has become the authorities’ pet phrase. Attributing civil society protests to the manipulation by “foreign forces” not only exonerates those in power of accountability, but also enables them to crack down on civilians by extrajudicial means as a way to deter others.

Unfortunately, this practice has spread to Hong Kong. An obvious sign of this is the October 19, 2014 televised speech by Chief Executive Chun-ying Leung, in which he attacked Hong Kong people’s civil disobedience, citing the “support and manipulation by foreign forces” as one of the bases of his attack. Ironically, even Rita Fan,1 a representative figure of the pro-establishment camp, had to admit that “no one has shown me any conclusive proof,” and “this is only a suspicion.” That the Chief Executive of Hong Kong could spout lies, abandoning the last bit of his dignity, is clear evidence of the “mainlandization” of Hong Kong politics.

But it is precisely the “mainlandization” of Hong Kong politics, which is messing Hong Kong up, that C.Y. Leung doesn’t dare face. Even the mainstream Duowei News had to say something. In an editorial titled “How Can Overstepping One’s Authority and Abuse of Power Keep Hong Kong Stable? Role of the Liaison Office of the Central People’s Government in Hong Kong Needs Urgent Reexamination,” Duowei candidly admitted, “For a long time, the actual function of the Liaison Office has far exceeded the originally designated role of a ‘liaison.’ Due to its constant overreaching, its authority has exceeded that of the Hong Kong SAR government and assumed the role of ‘the second Central government’ in Hong Kong.”2 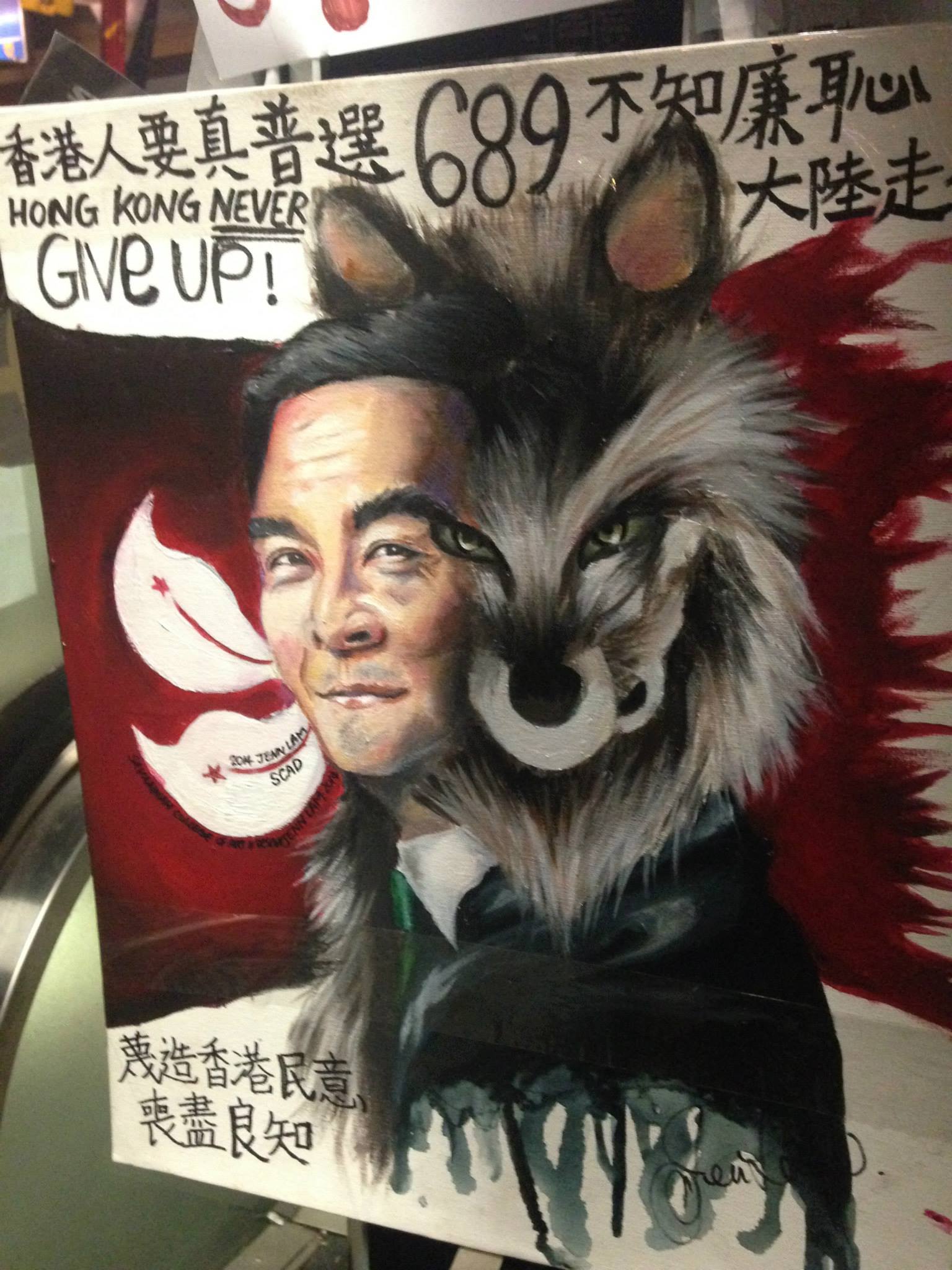 Poster depicting C.Y. Leung as a wolf with no conscience
or sense of shame, Admiralty, October 10, 2014. HRIC photo.

At least two consequences resulted from the Liaison Office’s overstepping its authority and abuse of power:    The first one is political corruption. “They sell two commodities at various dinners and banquets: seats at the National People’s Congress and the National Committee of the Chinese People’s Political Consultative Conference, as well as access to the ‘small circle’ for ascendance to the throne of the Hong Kong Chief Executive. This has led to rampant buying and selling of public offices in Hong Kong. The various kinds of power-for-money deals spawned by this agency have gradually eroded the integrity that Hong Kongers used to be so proud of. It is no exaggeration to say that the Liaison Office has clearly drowned in the ocean of corruption.”3

The second one is the export to Hong Kong of the mainland’s struggle philosophy and dictatorial mindset in their entirety. “Even today, many central government officials based in Hong Kong are still holding onto the struggle mindset with which they conducted the negotiations with the British, and thus view Hong Kong’s pan-democracy camp as if they were class enemies.” The Duowei editorial couldn’t help but ask, “After all these years, have these people not struggled enough?”

These two consequences substantiate the objective trend of the “mainlandization” of Hong Kong politics, of which the Liaison Office is the prime mover. Moreover, in order to continue taking advantage of it, it is also maintaining the trend and, deliberately obstructing the plan to implement genuine universal suffrage. As the Duowei editorial wrote, “To secure the enormous benefits they can reap in a malfunctioning political environment, they didn’t hesitate to cheat and lie, and secretly gloat at the demise of the political reform, at the expense of sacrificing Hong Kong people’s political rights. It is only by maintaining the current ‘small circle’ election system can they keep all the ambitious office-seekers in Hong Kong to continue to beg favors of them, thus validating their ‘worth.’” Frankly speaking, the Liaison Office has hijacked the notion of “one country” in “one country, two systems,” and is equating “one country” with the “mainlandization” of Hong Kong politics, and using “one country” as a white glove that masks their extortion of the little clique.

It is plain to see that a Liaison Office that oversteps its authority and abuses its power is tantamount to being a fiefdom governing Hong Kong independent of the central government as well as an external power monopolizing Hong Kong’s political artery. Obstructing genuine universal suffrage is only a means to protecting their fiefdom and monopoly. This harms not only the “two systems,” but also the “one country.” It not only betrays the political promises of “Hong Kong people governing Hong Kong” and “high degree of autonomy,” but also ruins the core value of Hong Kong’s characteristic of integrity. 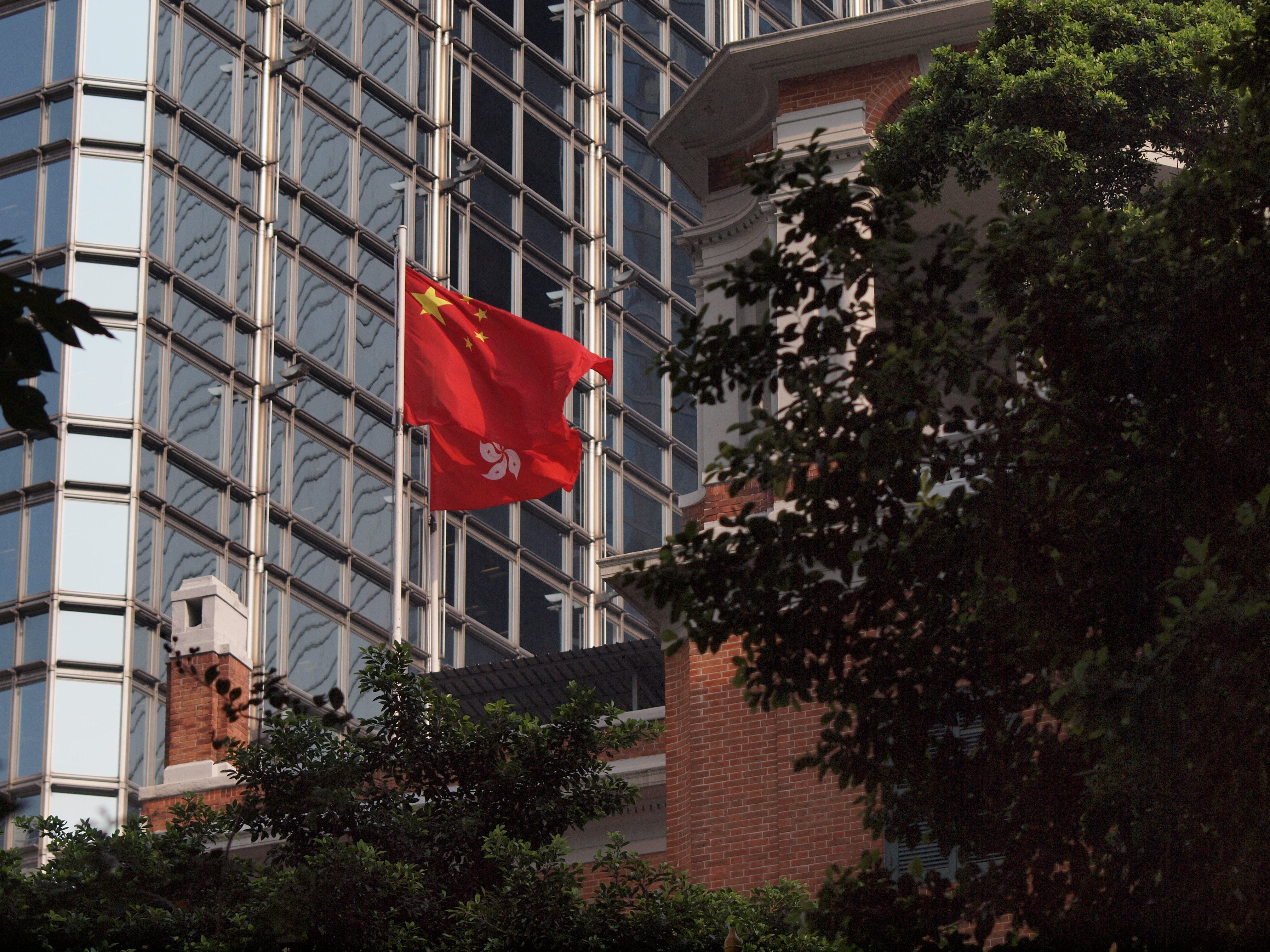 Before the handover of Hong Kong, there used to be a somewhat optimistic forecast in the streets that Hong Kong’s core values were bound to have an impact on the mainland and serve as the engine of China’s peaceful transformation. Given the current situation, such hopes were mostly dashed. This is not to say that Hong Kong hasn’t had any positive impact on the mainland, but that this impact, compared to the mainland’s infiltration into Hong Kong, is negligible. This should not come as a surprise. After all, Mainland China is massive with a booming economy. How can a tiny Hong Kong possibly withstand all this? Hong Kong’s fall is inevitable.

The “mainlandization” of Hong Kong politics results in the overall “mainlandization” of Hong Kong. Increasingly, Hong Kong has lost its own characteristics and autonomy. Aside from the larger number of foreign faces in the streets, it is hard for newly arriving mainlanders in Hong Kong to experience the sense of freshness when encountering a different culture. Most frightening of all, even the social structure and social issues are growingly similar: the same winner-take-all by the power elite, the same polarization, the same helpless underclass, and the same young generation in despair. If civil rights are truly guaranteed, it would not be difficult for the Hong Kong people to reverse all this through a struggle within the system. But the lack of civil rights has left them defenseless.

So, this is the anger and anxiety of the people of Hong Kong. They had no other choice but stake everything on genuine universal suffrage. If the long-awaited genuine universal suffrage vanishes, then all hopes are gone, leaving civil obedience outside the system the last option. The power elite represented by the Liaison Office understands this all too well: the realization of universal suffrage would lift the last cover of their special interests. When neither side has a way out, confrontation is inevitable. Therefore, Hong Kong’s political crisis, after years of accumulation, went into full blast. 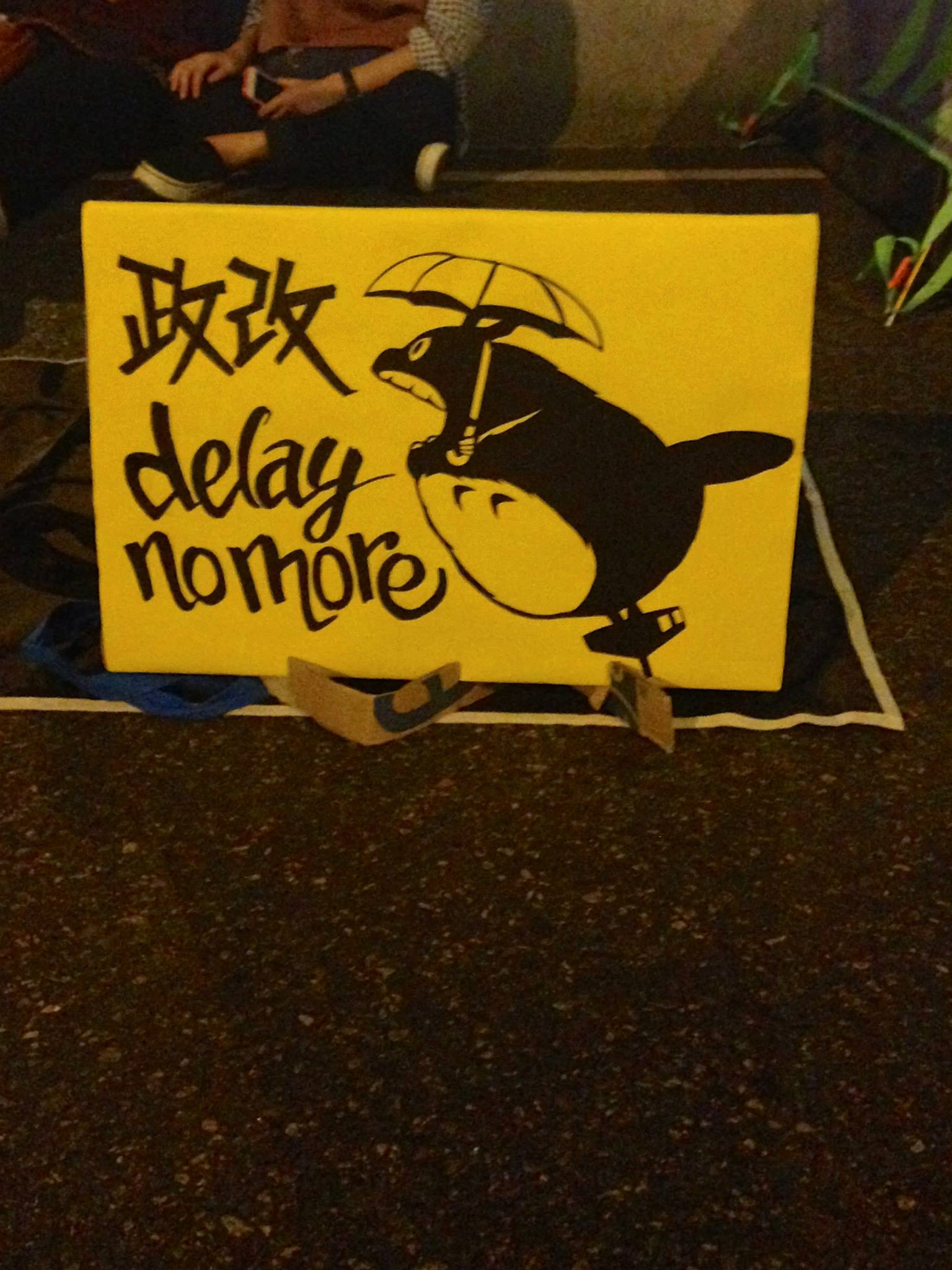 Therefore, Hong Kong’s issues have nothing to do with the manipulation of external forces—even Rita Fan had to admit that she has seen no such evidence at all. The essence of Hong Kong’s problems is, rather, the confrontation between “mainlandization” and Hong Kong’s autonomy, and between the power elite hijacking the “one country” and Hong Kong’s civil society—in short, the confrontation between the oppressor and the oppressed. The “external forces,” “Hong Kong separatism,” and “color revolution” are all pretexts fabricated to cover up the real issue, which is a straight replication of the mainland’s tried and tested rhetoric of stability maintenance. Not only does it fail to dispel the notion of the “mainlandization” of Hong Kong’s politics, it in fact serves as its additional proof.

Of course, “mainlandization” doesn’t occur only in Hong Kong. It is wreaking havoc also in Taiwan, the entire Chinese-speaking community, even the entire world. The place worst hit by “mainlandization” is actually the mainland itself. However, the mainland is a debilitated society, which has lost the necessary ability to fight. Fortunately, there is still Hong Kong. Even though it faces the same ruination by “mainlandization,” Hong Kong still preserves its last advantage that is absent on the mainland, namely the ability to fight and the environment in which to fight: human rights protection, a civil society with a large and solid base, a strong tradition of rule of law, and the attention of the international opinion. “Mainlandization” is thus destined to face tenacious resistance in Hong Kong. Hong Kong is going down continuously, but its people resist going down. And it still has what it takes to fight. 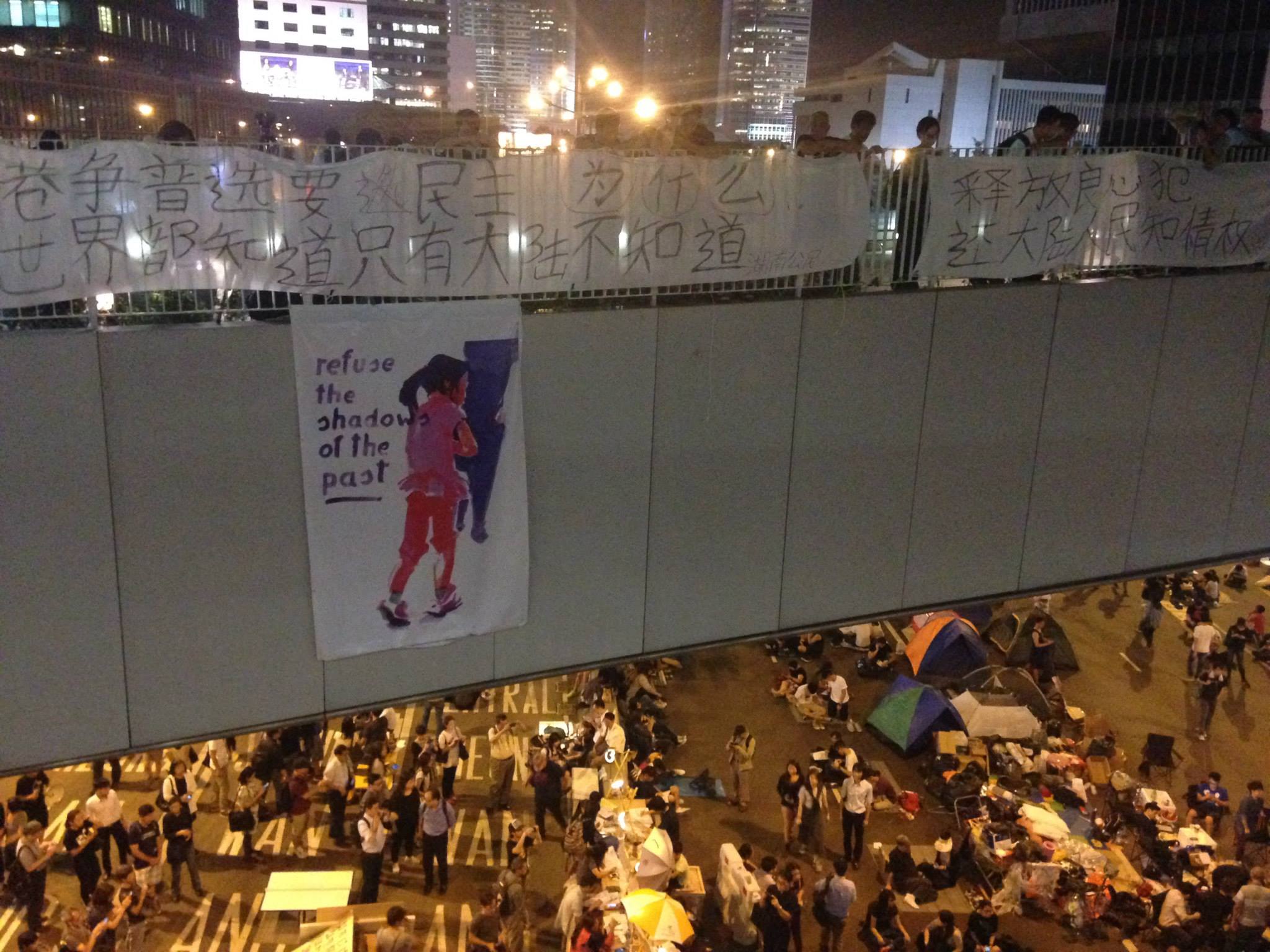 There is ocean on the one side, and steep mountains on the other. This is Hong Kong, the contemporary Thermopylae. And Hong Kong’s civil disobedience is the Battle of Thermopylae of the new era. Between defending the glories of Greece and perishing in the surging waves of Persianization, this is a make-or-break moment for Hong Kong.