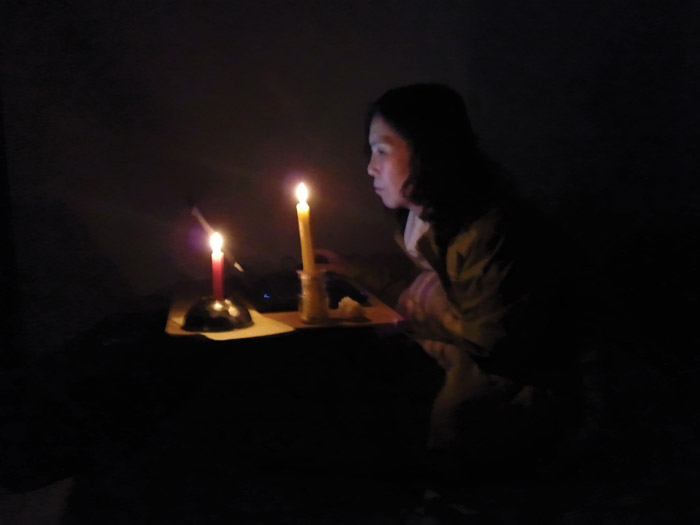 On the morning of December 29, 2011, the Xicheng District People’s Court of Beijing heard the case of human rights advocate Ni Yulan (倪玉兰) and her husband, Dong Jiqin (董继勤). Both are charged with “picking quarrels and provoking troubles” (寻衅滋事) and “fraud” (诈骗). Their defense counsel Cheng Hai (程海) entered a not guilty plea on their behalf and submitted a request for access to new evidence, including evidence related to Ni Yulan’s physical health and injuries. After a hearing of four and a half hours, the court did not announce its verdict and is reportedly considering the request for new evidence.

Ni Yulan’s daughter Dong Beibei (董贝贝) told Human Rights in China that she was allowed in the courtroom as a witness for her parents, but only for 10 minutes. According to Dong Beibei, her mother was questioned “lying on an ambulance stretcher and breathing through an oxygen mask.” Dong Beibei was later quoted on Twitter as saying: “I was heartbroken!”

On the day of the hearing, the courthouse was reportedly heavily guarded. Beijing rights activists Ye Jinghuan (野靖环), Zhou Li (周莉), and others were put under police surveillance. Many petitioners who came to show their support were expelled by authorities – some were even detained in a nearby police substation. A Beijing petitioner told Human Rights in China, “The hearing hadn’t even started, and police officers dragged about the supporters to the Xinjiekou Police Substation. One of these [supporters] was Dong Jiqin’s younger brother [Dong Xiaoping (董晓平)].” Ge Zhihui (葛志慧) and others who had been planning to testify for the defendants were forbidden to leave their homes by the police.

The indictment, posted online by Peng Jian (彭剑), one of Ni Yulan’s lawyers, alleges that the couple “stayed in room 1018 at the Xin Royal Palace Hotel (御鑫宫宾馆) in Xicheng District, Beijing without having registered with the hotel, and then unreasonably refused to pay the hotel fees of 69,972 yuan” [US$11,073]. These alleged facts are the basis for the charge of “picking quarrels and provoking troubles.” Defense counsel, Cheng Hai argued that Ni Yulan’s family had lived in their home at No. 19 Qianzhang Alley, Xicheng District until the home was forcibly demolished in 2008. However, because the authorities had not relocated them, Ni Yulan was left homeless when she was released from prison in April 2010, and the couple was forced to wander the streets. Cheng Hai argues that it was the Xicheng District police that forced the couple to go to the Xin Royal Palace Hotel, and that this case involves a financial conflict and should have been dealt with as a civil case. The indictment also alleges that Ni Yulan “lied about her status as a lawyer and fabricated tragic stories that she was persecuted” in order to gain sympathy and swindle others.

Ni Yulan, 51, graduated from China University of Political Science and Law (中国政法大学). Ni Yulan used her legal knowledge to advocate for the rights of vulnerable people. In 2001, when China won the Olympic bid, Beijing underwent large scale demolitions. She advocated for those impacted by the demolitions, gathered photographic evidence, and resisted the forced demolition of her own home. For these activities, authorities threw her into jail twice in 2002 and 2008. While in prison, she was severely beaten by police and suffered from incontinence, a fractured tailbone, and the inability to walk normally.

Ni Yulan’s case has garnered international attention. On February 11, 2011, U.S. Ambassador to China Jon Huntsman visited Ni Yulan in her temporary home. On December 22, 2011, the Dutch government announced that it had awarded the 2011 Human Rights Defenders Tulip Award to Ni Yulan. This award recognizes individuals who have defended and promoted the rights of others, while showing great courage in the face of adversity.

For more information on Ni Yulan and Dong Jiqin, see:

“The State’s Respect for and Protection of Human Rights Begins with the Strict Prohibition of Torture,” January 17, 2011