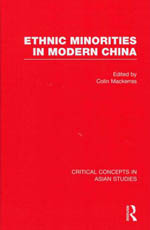 What a behemoth! Four thick volumes, 77 previously published essays, mostly in English by Western specialists, plus a few translated from the Chinese. The subject is China’s officially designated 55 “nationalities”—whether this is exactly the right word is itself a subject here—that make up 123 million people, or 9.44 percent of the population, while occupying over 60 percent of the country’s territory.

Among the well-known experts in the collection, in addition to the editor, are Dru Gladney, Robert Barnett, Melvin Goldstein, Nicholas Bequelin, and June Teufel Dreyer. Scholars who study small minorities known primarily to specialists are also included. Yan Ruxian, a research fellow at the Institute of Nationality Studies at the Chinese Academy of Social Sciences, for example, provides detailed information on the Naxi, population under 300,000.

It is generally agreed in these volumes that Hans—the majority ethnic group in China—look down on non-Hans. This attitude underlies Beijing’s mission civilisatrice to bring the minorities up to relatively equal economic status—they are generally much poorer than Hans—but also to raise them culturally, an attitude felt as condescending by some (but not all) minorities. In this collection many minorities are said to be content with being part of China; others, notably the Uyghurs and the Tibetans, are famously restive.

One might ask why Routledge has published this unwieldy set, along with seven other four-volume collections, with titles like Women in Asia and Imperial Japan and the World: 1931–1945. For Colin Mackerras’s compilation, I googled a few of the authors and found most of their opinions and articles. So what is the readership for these four volumes?

It is unlikely that many libraries will hold more than one set, and only a handful of specialists will buy one. Nonetheless, these volumes furnish a comprehensive range of information and views. Most of the contributors agree that the Chinese state, basing its views ultimately on Marx and Stalin, while condescending toward its minorities, is raising their economic condition. The question is who benefits; often it is the Hans who now live in the minority areas.

Henry Schwarz shows the changes in communist minority policy, from pre-1949, when—I didn’t know this—“[t]he constitution of the Chinese Soviet Republic promised all minorities the right to secede from China and pledged that the communists would assist the minorities to overthrow their rulers and to develop their cultures and languages.” (Volume 1, page 234) Once the Party came to power, this right was “quietly dropped and gradually replaced with an insistence on China’s territorial integrity.” In another essay, by Dru Gladney, we read that on May 12, 1989, during the demonstrations in Tiananmen Square, 3,000 Muslim students marched into the square shouting “Death to China’s Salman Rushdie.” (Volume 3, page 265) They were protesting the publication of a book called “Sexual Customs” that they claimed defamed Islam. I doubt if any of us who were in the square noticed or remember that march, but the book was immediately banned and “13,000,000 copies were allegedly confiscated.” (Volume 3, page 266) In the midst of the huge anti-government outpouring in Tiananmen Square, the Muslim march was officially approved and the event appeared on the front page of the People’s Daily. This was a minority’s “protest to the government, rather than against it.” (Volume 3, page 268)

Elsewhere, Gladney writes of the state-approved “eroticization” of the minorities, which, as many tourists in China have seen, provides sexy dances and songs in some minority areas.  As described in articles by Mary L. Cingcade and Ashild Kolas, a town in southwest China renamed Shangri-la has prospered by giving the impression that James Hilton’s Lost Horizonmay have actually happened there. (Volume 2, pages 251, 281) Rich Han men fly to such places to consort with “native, ” “loose” minority prostitutes who in fact are often young Hans dressed like minority women. In another essay, Ben Hillman and Lee-Anne Henfry state that the “Chinese discourse on ethnic relations is thus characterized by a metaphorical domination of the modern Han male over the primitive minority female.” (Volume 3, page 5) They quote Gladney, who notes that by contrast, minority men “are generally eroticized as strong and virile, or possessing extraordinary powers.” (Volume 3, page 5) Gladney also observes that sex shops in Chinese cities sell a “Tibetan” male-potency enhancing product called “Vajra Divinity Oil.” Among its probable marketing strategies is “the Chinese association of Tibetan men with a virile masculinity.” (Volume 3, page 9)

Scholars’ ideological/political views rise to the surface most distinctly in the matter of Tibet’s relationship with China and what might be called the independence issue. The Tibetanist Robert Barnett analyzes the anti-Chinese uprising throughout Tibet and China’s Tibetan areas in 2008, a rare example of Tibetan violence. He notes that these were the first protests in the Internet age (bearing a startling resemblance to the uprisings in Egypt and Tunisia) establishing an unofficial network set up in Beijing by the Tibetan poet Woeser and her husband, the Chinese writer Wang Lixiong; the exchange of information enabled possibly 150 incidents to take place, sometimes in remote villages. (Volume 1, page 473) Optimistic misreporting by Chinese cadres in Tibetan areas had misled Beijing, which now reacted with overwhelming force.

Mr. Barnett’s views contrast with those of the lawyer Barry Sautman, whose contentions vary little from Beijing’s. He writes dismissively of Tibetan exile groups, Westerners sympathetic to the Dalai Lama, and some Tibetanists. Mr. Sautman urges Chinese president Hu Jintao (whom I interviewed in Lhasa in 1988 while he was Party secretary where he expressed his intense dislike of Tibetans) whose “determination, commitment, and wisdom” he praises, to hold a “direct dialogue” with the Dalai Lama. (Up to now Beijing refuses to do just this with what it calls the “criminal Dalai.”) But if this conversation takes place, suggests Mr. Sautman, “there is a possibility that Hu Jintao and the Dalai Lama [who already has one] might share a Nobel peace prize one day.” (Volume 4, page 71) If that happens one thing is certain: Mr. Hu would not join Liu Xiaobo, the Chinese winner of that prize in 2010, in prison.